Red Tails Actors , the New Faces of the Black Revolution in Hollywood.


I urge everyone to see Red Tails, the film based on the story of the legendary Tuskegee Airmen that is being released this weekend. This movie offers all the opportunity to view a rare event on the silver screen: portrayals of intelligent, complex and dignified African Americans who have played a pivotal role in the one of the most celebrated chapters in modern military history.

Red Tails has already received great buzz in the Twitterverse, and has been shown in screenings ranging from Tuskegee University to The White House. In fact, I recently had the honor of attending a screening in Birmingham, Michigan at the invitation of former Detroit Mayor Dennis Archer and his son, Ignition Media CEO Dennis Archer, Jr. The event brought out cast members, luminaries, BE 100s CEOs and a few of the original Tuskegee Airmen. In fact, meeting these courageous men was the highlight of that evening. 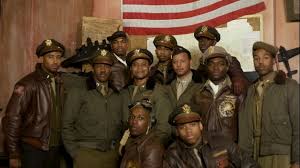