A woman who said she was beaten when she tried to record an alleged incident of police brutality last week plans to set off an investigation through the Houston Police Department, said one of the activists behind the effort.

The decision came as police representatives declined to respond to specific questions about the alleged incident.

"For this incident to be investigated they need to file an internal affairs division complaint," HPD spokesman Victor Senties said.

Muhammad said the family was in contact with the FBI about an investigation into excessive use of force. 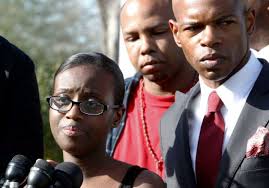