"Just last week, Scott Brown said in an interview that he thinks Mitt Romney and Warren Buffett should get special tax breaks that are not available to most Americans. I don't think that's fair," Warren said in a new post on Blue Mass Group, a New England independent political blog.

"This is one of the places where Scott Brown and I see things differently," she said.

The "Buffett Rule," named after billionaire William Buffett, would require people who make more than $1 million to pay at least 30 percent in taxes. President Barack Obama highlighted the proposal in his State of the Union address and is likely to hammer away at it in the coming months. The issue will also take center stage this week in the Senate as Democrats prepare to unveil a bill that would turn the "Buffett Rule" into law. 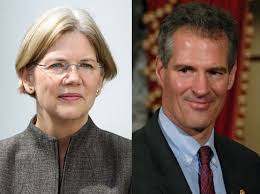