It wasn't all good news for Team "Hunger Games" over the weekend. Despite fawning reviews and record-breaking ticket sales, some fans of the blockbuster young adult trilogy by author Suzanne Collins were upset by the decision to cast an African-American actress as Rue, one of the supporting characters. Never mind that she's described as having "dark brown skin" in the original book.

As Jezebel notes, many "Hunger Games" viewers resorted to sending racist tweets over the fact that Rue (played in the film by young actress Amandla Sternberg) was black.
"Why does Rue have to be black," wrote one ignorant fan, whose Twitter page no longer exists. "Not gonna lie, kinda ruined the movie."

"Awkward moment when Rue is some black girl and not the innocent blonde girl you picture," wrote another user, whose account has also been deleted. 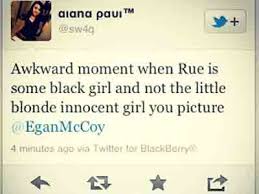